Prepping for the Eclipse

August 17, 2017
We'll have to drive around 9-10 hours to see the total eclipse. We've decided to leave early on Friday in hopes of beating the major traffic rush that will likely occur from Saturday through Monday. Naturally, I have a pretty big checklist of things we're gonna need for this trip. I tend to stress myself out over planning for as many different situations as I can figure, especially now that we have children in tow. Back when it was only my wife and me, it wasn't such a big deal.

The kids alone have their own set of things that must be prepared: 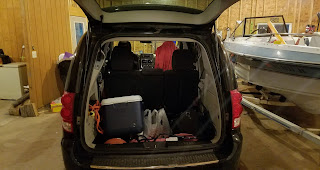 Since we'll be traveling through areas with no cell coverage I have to download some of the kids' favorite YouTube videos to keep them happy. I don't like them burying their heads constantly in a device, so the travel bingo and iSpy type games come in real handy. My kids will play these games for about an hour, so that's a pretty good way to pass the time. Minecraft across my phone's hotspot LAN is also a popular activity. For this road trip I'm also trying to think of a way to turn the trip into an RPG game. I'm thinking of giving each kid a few note cards with 'missions' on them where they have to spot something and write down some descriptions of the item so that we can all solve a bigger mystery or quest.

As for the Eclipse Van, I have a more generalized list:
You find yourself wondering, "Your pillows? Don't hotels usually have pillows?" You're correct, most do, especially the kind that aren't leased by the hour, but it doesn't matter how comfortable a bed is. If I don't have my pillow I can't sleep well. Tiff and I started this trend a few years back and it's rare that we don't take our pillows along, especially on trips where we'll be away from home for a few days. Heaven forbid I lose my pillow or it finally disintegrates.

I've downloaded all the Google Maps along the route onto my phone because I anticipate that the cell networks will be overloaded as early as Sunday and for sure on Monday during the eclipse. I'm really hoping that as people start heading back for home after the eclipse finishes that I can get on the my phone and see the traffic congestion maps. I'm still on the fence about whether we should wait for a few hours before heading North or if we should try taking back roads North for a while before hitting the interstate. I'm sure on the day of the choice will be fairly clear.

Since there will be so many people crammed into areas that normally don't accommodate said number of people, I'll have to make sure the van is topped off with fuel. I may even bring a small gas can along just in case, though that seems a bit extreme, right?

Until we actually need the damn thing!

I'll be honest with you: I'm very conflicted about this trip. I'm so excited to see a total eclipse, yet I'm nervous about the traffic and the huge amounts of people. I live in the far north of Wisconsin for a reason after all. I'm just not accustomed to being around massive numbers of people at once. Of course, the scenarios are always far worse in my head. We're probably better off planning to make our own meals instead of eating out, especially Sunday into Monday.

Apparently the traffic wasn't going to be challenging enough so we decided to turn up the pressure by scheduling an orthodontist appointment for one of the kids on Tuesday at 3:15 back home. At least we're not crossing time zones, I guess. Hooray for small victories?

Popular posts from this blog

January 03, 2013
It has been forever since I wrote anything on this site.  This post will be a quick one, but hopefully informative. First of all, I have many irons in the fire.  Novels and short stories alike.  I participated in (and won!) NaNoWriMo for the first time this year.  The story I wrote for that is called Handbasket  and my goal is to have the first draft completed by the end of January.  Then it will be revision and editing time.  Hopefully that process will be finished by the end of February, then it will be time to push the story out to my beta readers and hopefully by the end of March I will have some good feedback.  Then, the next round of edits will be in full swing and hopefully the next draft will be pushed out to the beta readers again by the end of April. If everything comes back good, I'm looking at releasing the story in either May or June. Handbasket  is a post-apocalyptic novel following a colony of survivors in Marquette, Michigan as they struggle to survive and begin t
Read more

June 08, 2014
Dulcima  is LIVE on Amazon! CLICK HERE TO PURCHASE You can also click on the book cover to your right. I hope you all enjoy it! Thank you! -D
Read more

A Reflection of Strange October for Free!

July 08, 2013
For the month of July only, you can pick up the ebook copy of A Reflection of Strange October  for free over at my Smashwords page. Click here or click on the cover of the book on the right sidebar to go to the site. Make sure to use the coupon code SW100 at checkout (of which Smashwords so graciously reminds you of at the product page). I'm working hard on having a few new stories ready for the 2013 holiday season. Wish me luck! That's all for now. Thanks! -D
Read more

Derrek
Derrek has been scratching down stories, poems and lyrics for the better part of his life. His main interests are in the science fiction and fantasy genres. The earliest book series that he can remember getting fully immersed in was the Goosebumps series by R.L. Stine. His favorite authors are: Arthur C. Clarke, Neil Gaiman, Roger Zelazny, and J.K. Rowling. He is also influenced heavily by the stories being told within the framework of video games. He currently resides in Wisconsin with his wife Tiffany and three beautiful daughters.