That being said, it's go time. I've been slacking on the writing front ever since 2014. I think switching jobs, moving and welcoming a baby to the family probably had a lot to do with it, but some of it is just me not writing as much as I should be. In the past few weeks my spark has been reignited and I've been working on various projects. Here's a look at what I've been working on lately and will continue to work on.


Dulcima is finally available in paperback, which is a goal I had ever since I released the ebook version in June 2014. For whatever reason it took me until November of 2017 to get it done but I

think it has been well worth the wait. Instead of using Createspace I used Amazon's new KDP platform to create the paperback and I think the quality of the printing is awesome. Not so awesome is the fact that I have to charge $10.99 in order to make about $1 worth of profit after production, shipping and Amazon's listing cut. Since it's a rather lengthy book (~422 pages compared to ~190 for A Reflection of Strange October), the production costs are naturally higher. The quality of the book justifies the price I suppose, but I'd much rather be able to sell it around $8. I can offer the ebook much cheaper since there are no production costs and my profits on that $2.99 ebook are quite a bit higher than the $10.99 paperback. At this point, I'm not in this for the money. I like writing and I really like when people read what I've written, especially if they enjoy it. It's a hobby (one that I wouldn't mind doing more often and getting more serious with perhaps as a second career if things came to that) and I have the luxury of not being desperate to sell units. I've never been good at tooting my own horn and being a salesmen. That's something I'm trying to improve in 2018. I've had a lot of encouragement from people that I know who have told me that it's quite an accomplishment to write a book and that I shouldn't be bashful about being proud of it and letting others know the same thing. We'll see how that all goes! Speaking of that....

I now have a Facebook page. Again, something I've been meaning to put together for a long time and never got around to it. I'll be more inclined to post about my writings on an author page than on my personal Facebook because, again, I don't feel like inundating my friends with my writing endeavors. Unless they want to know all about it, in which case they will like my page. So far I've gotten a lot of likes from people I know. Hopefully readers I've never met will begin to swell those ranks as well.
Continuing with the theme of social media, I'd love to create a podcast or even do a series of videos someday. The challenge will be to figure out the topics that would interest people. I should probably use my Twitter account more often as well, but that's never really been my thing. I've been told it should be. We'll see. 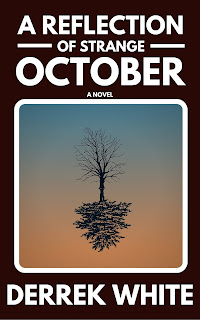 I decided to give A Reflection of Strange October (AROSO) a face-lift and in the process, I ended up going through the manuscript and doing some quick edits to tighten up grammar and dialog. I didn't change anything that would impact the story, just streamlined the writing some and fixed grammatical errors that have been with the story since the beginning. I'm sure there are still errors in there somewhere since I didn't pull out the fine-toothed comb, but it is definitely improved. I also added a section at the end with a little backstory of how AROSO came to be. Out of all this work emerged the Fourth Edition of AROSO. It should be live on Amazon within the next few days. If you already own the First Edition paperback, I don't think there's any reason to buy this new copy unless you really like the new cover or just want to show me some love. I wouldn't mind that one bit, but I want to make sure that you understand nothing big has changed and I don't want folks feeling ripped off. That's not what I'm about at all. If you own a copy of the ebook from Amazon, it should automatically synchronize the new versions to your account. If you have the paperback copy and show me proof, I'll send you a complementary copy of the ebook to your email in your choice of either mobi (Kindle), epub, or PDF format.

The Second Book of the Webwork Chronicles

I have been quietly working on the sequel to Dulcima over the past few years and have really been digging in lately. It's my goal to finish it in 2018. Depending on how much editing and revisions need to happen, it could be available for purchase later in 2018 as well.  I can tell you that the story will continue to follow the crews of the Sevensea, Red Athena and Dulcima as they navigate a galaxy beginning to engage in war. There will be new characters and story lines emerging while older ones wrap up for good. So far I've been writing each ship's part separately and I will combine them all into a novel in a similar format to Dulcima--unless I find some format that seems to work better before then.
I have about 10 chapters written up to this point and honestly, I feel like I'm just getting started. That means this next one could be a lot longer than Dulcima was and time will tell if that's a good or bad thing. If it's a good story then I suppose the length won't be a huge deal. However, paperback production costs being what they are may force me into splitting it up possibly, which is something I really don't want to do. We'll see how it goes. I like to let things form organically.

Short Stories and Other Works

I won't only be spending time in the Webwork this year. There's another novel in the works of a YA Fantasy nature but unless I get tons of time, I don't expect that one to see the light this year. I'd have to be really prolific and if I'm being honest, I have all that I can handle to push out the next Webwork book. Baby steps.
I've been working on a few short stories that I want to turn into a collection. A few of the stories are done, but I need to finish a few more before I feel comfortable offering them as a collection. I want there to be enough value to the reader (7-10 stories minimum). Short stories aren't really my forte--I've focused mostly on novels over the years--so writing them has been a growing experience that I've enjoyed. It takes real skill to present a story in fewer words and it's one that I've not yet attained but I feel will translate well into my novel writing.

Anybody who knows me knows that I enjoy doing different voices and impressions. I've played around with the idea of trying to do voice work but have never really hopped into the water with it yet. I'd really like to turn one of my books into an audiobook. Maybe this will be the year I do it. If nothing else it will be an experiment for me to see what the process is like and how time consuming it is. I have a lot of experience recording audio from my band days, so I feel like I have a leg up on that part of it all. I know how to get something of quality recorded--it's just a matter of performance. Good voice talent are often good actors. They have a way of sounding natural and making you forget that they're reading a book. I never felt like my out-loud reading ability has been anything special, so it's something I'll need to develop. That being said, who knows if I'll get it done in 2018. Aim high, am I right?

If everything goes as planned, you should be hearing from me a lot more this year. Thanks for stopping in.

Popular posts from this blog

January 03, 2013
It has been forever since I wrote anything on this site.  This post will be a quick one, but hopefully informative. First of all, I have many irons in the fire.  Novels and short stories alike.  I participated in (and won!) NaNoWriMo for the first time this year.  The story I wrote for that is called Handbasket  and my goal is to have the first draft completed by the end of January.  Then it will be revision and editing time.  Hopefully that process will be finished by the end of February, then it will be time to push the story out to my beta readers and hopefully by the end of March I will have some good feedback.  Then, the next round of edits will be in full swing and hopefully the next draft will be pushed out to the beta readers again by the end of April. If everything comes back good, I'm looking at releasing the story in either May or June. Handbasket  is a post-apocalyptic novel following a colony of survivors in Marquette, Michigan as they struggle to survive and begin t
Read more

June 08, 2014
Dulcima  is LIVE on Amazon! CLICK HERE TO PURCHASE You can also click on the book cover to your right. I hope you all enjoy it! Thank you! -D
Read more

A Reflection of Strange October for Free!

July 08, 2013
For the month of July only, you can pick up the ebook copy of A Reflection of Strange October  for free over at my Smashwords page. Click here or click on the cover of the book on the right sidebar to go to the site. Make sure to use the coupon code SW100 at checkout (of which Smashwords so graciously reminds you of at the product page). I'm working hard on having a few new stories ready for the 2013 holiday season. Wish me luck! That's all for now. Thanks! -D
Read more

Derrek
Derrek has been scratching down stories, poems and lyrics for the better part of his life. His main interests are in the science fiction and fantasy genres. The earliest book series that he can remember getting fully immersed in was the Goosebumps series by R.L. Stine. His favorite authors are: Arthur C. Clarke, Neil Gaiman, Roger Zelazny, and J.K. Rowling. He is also influenced heavily by the stories being told within the framework of video games. He currently resides in Wisconsin with his wife Tiffany and three beautiful daughters.